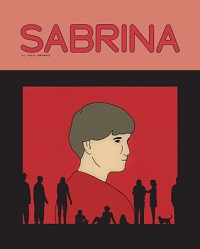 This book by Nick Drnaso made history this year by being the first graphic novel to be longlisted for the Booker prize. I’m not going to get into whether it deserves the nod or whether graphic novels ought to be considered for the Booker. I do think they are just as much an art as traditional prose novels, but there’s room to debate whether the forms are similar enough to be part of the same competition. However, it’s not a debate I’m all that interested in. What I care about is whether Sabrina is any good. It turns out that it is very good.

The book opens with two sisters talking together in their parents’ house, where one of them is house sitting. They talk about a boyfriend and a job interview, work a crossword, and consider going camping together. One of them leaves for a party. The next day, the house-sitting sister, feeds the cat, puts on her backpack, leaves a note, and walks out the door. All ordinary enough.

On the next page, we’re at an airport. A man named Calvin is picking up his friend Teddy. Teddy is quiet and seems to have no opinion about anything. He has come to stay with Calvin for a while, and so Calvin, after bringing him home, gets dressed in his military fatigues and heads to his night-shift job in online security.

Eventually, we come to understand that Teddy is grieving the disappearance of his girlfriend, Sabrina, the sister who went for a walk at the beginning of the book. That was the last time anyone saw her. The rest of the book explores people’s reactions to her story. As details emerge, everyone seems to have an opinion. Conspiracy theories abound. Teddy, who rarely leaves his room, listens to a talk radio rumor monger. Calvin surreptitiously searches online news stories and comment sections. At the same time, Calvin is trying to cope with the end of his marriage and make plans for his future.

Although the book has hints of mystery and of media criticism, specifically social media, at its heart, it’s about grief and how different people manage loss. I found Teddy’s paralysis and immersion in the worst versions of the story frustrating to watch, but I could also understood. Calvin, too, wants to make sense of things, both to help his friend and, I think, to find sense in his own life. People want to make sense of things. I’ve come across several articles and podcasts lately about that being the reason for conspiracy theories. A conspiracy theory attempts to make sense of lots of disparate facts. The problem is that conspiracy theories generally involve telling lies about people, often real people who are already in pain, and we see that play out in Sabrina.

Ultimately, though, what is compelling about the book is seeing that the way to get through grief is just to get through it. Maybe, for some, that involves some unhealthy behaviors for a time. But, eventually, it is possible to open your eyes and see a way out.

This entry was posted in Fiction, Graphic Novels / Comics. Bookmark the permalink.