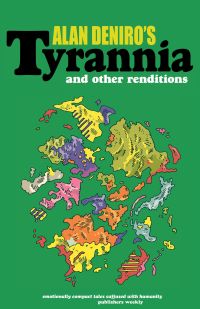 The short stories in this collection by Anya Johanna DeNiro are enjoyably dark and weird, sometimes a little too weird, in fact. But the stories that hit me right were so great that I don’t really mind the stories that didn’t.

A lot of the stories involve a world that is like our, but not quite, or they require the reader to look at the world in a different way. For example, there’s the title story, about a revolutionary who is killed that focuses on the decay of his body and the way the natural world and then the empire itself feed off him. There’s a story of a group of students who kidnap a scholar whose writing on torture became a handbook on how to do it correctly. And the house they take him to has underground tunnels where something unexplained lurks — what’s there is never explained, but it gets weird. Weird horrors alongside mundane horrors.

My favorite story, “Cudgel Springs” has a mom giving her kid a humorous but sometimes unsettling pep talk on the way to summer camp:

For starters, it helps to dress like everyone else and speak like your friends. Or don’t speak at all if that floats your boat. Which is easier if you don’t have friends. It’s not advised where you are going. Finding friends, that is. I know this, I lurked there in my salad days. Don’t self-edit, but avoid embarrassment. Don’t assume everyone is staring at you because you’re crazy. You might be crazy, but that’s probably not why they’re staring at you.

There’s also a terrific story called “The Philip Sidney Game” about a man who witnesses a car accident from a plane as it is landing. But it turns out that the man is a character in a story that the author forgot all about and now doesn’t know how to resolve. The looping nature of this story was a lot of fun.

A lot of the stories, though, were too weird for me to follow. Many are set in a post-apocalyptic future where the rules are entirely different and even the dominant life forms on the planet have changed. But, for me, I couldn’t figure out the world well enough in the space of a short story to get anything out of it. Lots of intriguing ideas, but they don’t go anywhere much. The good stories, though, made the collection worth reading.

This entry was posted in Short Stories/Essays, Speculative Fiction. Bookmark the permalink.