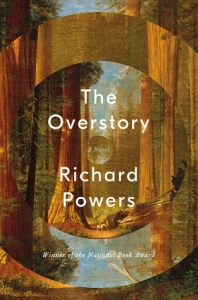 This book by Richard Powers took me by surprise. He’s an author I’ve been meaning to read for years, and although I wasn’t sure The Overstory was really the kind of book I’d like, I saw enough praise for it that I decided to give it a try. The opening section (titled “Roots”) initially didn’t allay my skepticism because each chapter seemed to exist in isolation. I was expecting a novel, not a 500-page story collection. But each story captured my interest. There’s a farmer who photographs the same chestnut tree each month, a tradition that continues through the generations as chestnuts are dying out everywhere else. There’s the computer programmer who falls out of a tree and loses the use of his legs, only to later become inspired by trees to create a virtual world. There’s a scientist whose ideas about tree intelligence make her a pariah in academia. Each person is touched in some way by trees.

By the time the stories (mostly) came together in the second section (“Trunk”), I was hooked by Powers’ evocative writing, and the overarching story was almost immaterial, although I was glad that there were not as many strands to track as the opening section suggested. Although a few stories remain isolated, with only occasional references to the others, many of the stories converge when several characters become environmental activists who put their bodies on the line to save trees from deforestation. The final sections (“Crown” and “Seeds”) focus on the aftermath of their work.

Not all of the character portraits are equally successful, and some, particularly that of the troubled couple Ray and Dorothy, could be removed neatly from the overall book, possibly creating a tighter and more cohesive novel overall. But, honestly, as I was reading, I enjoyed every part of the book. Besides being a powerful tribute to the vital place of trees in our ecosystem, it’s also a meditation on what it means to be alive in the world, what it means to live a live of value. It is sobering and frightening while also being inspiring and hopeful. Somehow, life finds a way. The question is, what place will humans have in that ongoing life?

12 Responses to The Overstory