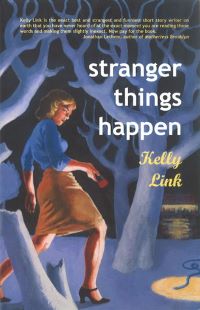 A few years ago, I read Kelly Link’s short story collection Get in Trouble. Despite generally liking short stories best when they’re kind of weird, I thought that collection was a little too weird. I can’t remember the details of those stories well enough now to compare them to the stories in her first collection, Stranger Things Happen. But I can say that I enjoyed this collection more. Maybe the stories are just a little less strange (and they’re very strange), or maybe I’ve changed enough as a reader or was just in the right mood to be able to just sit in the weirdness of these stories.

Some of the stories involve hauntings. The first story, “Carnation Lily, Lily, Rose,” is a series of a man just past death, trying to hold on to the memory of the woman he loved. “The Specialist’s Hat” involves twin girls living in a historic home and telling creepy stories and playing games about death. And “Louise’s Ghost” has a woman trying to use music to get a ghost out of her house only to wish to be haunted after the fact.

Fairy tales and myth feature heavily in the stories. Some stories feel like fairy tales, as was the case with “Water Off a Black Dog’s Back,” in which a man falls in love with a woman whose father has no nose and whose mother is missing a leg — and both seem to have an odd connection with the family dogs. And “Flying to Hell” is the story of a woman who seems to have become embroiled with a family from Greek myth, living in the contemporary world. “Travels with the Snow Queen” is about exactly that, a journey on torn-up feet involving not just the Snow Queen but also Briar Rose, all to find a man who may not be worth the trip. And “Shoe and Marriage” offers and different, and darker ending to the Cinderella story.

I don’t necessarily know what these stories mean, but I liked immersing myself in the images and general mood of them. In some of them, I didn’t know what was real in the story world and what wasn’t, and I liked being kept just a little off-kilter. It’s a feeling that can sometimes wear thin for me in a novel, but it’s great in a story.