Darkwater: Voices from within the Veil 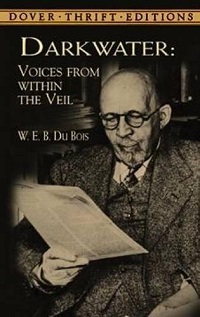 In my post about Caste, I mused over whether I might be better off reading some older books about race, my thinking being that books separated from current vocabulary and specific fights might feel less like a retread. And Darkwater by WEB Du Bois, published in 1920, served that purpose well, partly because it covers so many questions that are still, tragically, very relevant, but Du Bois, being from a different time, frames them differently, which, perhaps, will enable me to do the same as I think and talk about racism, sexism, class, and other issues that come up in this essay collection.

Some of the essays are very of their time and place and perhaps of limited value to contemporary readers not immersed in the history of the era in which Du Bois wrote. This was the case, I felt, in his writing about Africa, where things have changed so very drastically in 100 years. But other essays were astonishing in their relevance.

Throughout the book, he focuses on systemic injustices, primarily within the economic system. Race is one of many areas where he sees these injustices appear. He writes also about class and sex and how they all interconnect. In “Of Work and Wealth,” for instance, he talks about how the people who make the most money are not the ones who contribute the most to society, how work need not be the primary aim of life, and how the poor are not to blame for their situation:

Thus the shadow of hunger, in a world which never needs to be hungry, drives us to war and murder and hate. But why does hunger shadow so vast a mass of men? Manifestly because in the great organizing of men for work a few of the participants come out with more wealth than they can possibly use, while a vast number emerge with less than can decently support life.

And in “On the Ruling of Men,” he writes about the importance of having a system where all voices are heard and where every person is given a chance to thrive.

His essay “The Damnation of Women” is remarkable. There, his thesis is:

Only at the sacrifice of their intelligence and the chance to do their best work can the majority of modern women bear children.
All womanhood is hampered today because the world in which it is emerging is a world that tries to worship both virgins and mothers and in the end despises motherhood and despoils virgins.
The future woman must have a life work and economic independence. She must have knowledge. She must have the right of motherhood at her own discretion.

In “The Immortal Child,” he writes about how a lack of commitment to education, particularly of Black children, has led to an immense waste of genius. He also calls for free college and vocational training for all, writing that:

No nation tomorrow will call itself civilized which does not give every single human being college and vocational training free and under the best teaching force procurable for love or money.

Each essay pulls at another area where the U.S. as a whole (sometimes the world as a whole) has failed a large segment of his people. Race is one focus, and probably the one that gets the most attention overall. But what Du Bois presents is a clear vision of equality. The fact that this book is more than 100 years old is discouraging in that so many of these arguments still have to be made. I don’t know why it’s encouraging to remember that most of what I and others today want is something people have been calling for for generations, but it is encouraging. I think it helps to feel supported by history itself.

This entry was posted in Nonfiction. Bookmark the permalink.

2 Responses to Darkwater: Voices from within the Veil