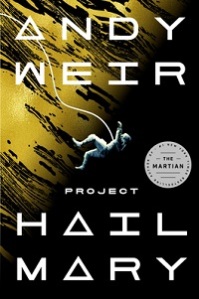 How to write about a book in which a great deal of the pleasure is in not knowing what is going to happen next? And where an immense amount of what I loved about the book involves what happens after a specific surprising event? Well, let’s see how it goes.

I’ve been very much enjoying books with a lot of story these days, and that is what Andy Weir delivers here. It is a plotty book, a space adventure, where the fate of the world rests in the hands of a junior high school science teacher. The story is told in two strands, there’s the primary one, where Ryland Grace wakes up alone on a spaceship with two dead bodies and no idea how he got there (and no awareness at first that he’s even on a spaceship). The other strand is the memory of how and why he got there, which he gradually recovers as he investigates the ship. So we follow him trying to complete his mission while he remembers the details of the mission.

By telling the story in this way, Andy Weir gives readers some relief from the intense lost in space part of the book, which also avoiding front-loading the book with a lot of exposition take takes place before the mission. It also puts Ryland on a literal journey of self-discovery, which, to be honest, is far less interesting than what he’s learning about his mission. But the mission itself is fascinating. Basically, the world is under threat by a form of alien life that is causing the sun to slowly dim. And he’s on a mission to learn more about that life form, selected in part because of a paper he wrote years ago, before leaving academia, about alien life.

A lot of the book is about problem solving, alone and in a group. There’s a lot of testing and failing and trying again, bouncing around theories and ideas, and just holding your breath and taking a big risk. There’s a lot of math and science, but most of it is clearly explained or easy enough to brush aside without sweating the details. As a teacher, Ryland is enough of a science generalist to be able to think across disciplines and without getting too, too deep into the science jargon, so that’s helpful.

But at the core of the book is a relationship, with scientists working together. And that’s the piece that gave this book heart. Learning how that friendship would turn out became just as important as learning how Ryland’s mission would turn out. The details of the interactions between these two characters were far more central to me than the details of the science. That’s what made me want to see the science work.

This entry was posted in Fiction, Speculative Fiction. Bookmark the permalink.