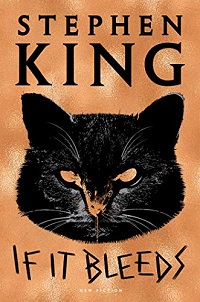 Stephen King’s newest book, If It Bleeds, is a collection of three stories and one novella.

Two of the stories are dark wish-fulfillment fantasies, in the vein of “The Monkey’s Paw.” The first, “Mr Harrigan’s Phone,” is set in the early days of the iPhone and involves a kid calling the cell phone of a dead benefactor. And the fourth story, “Rat,” involves a writer who seems willing to do anything to finally finish a novel. They’re good stories, with some satisfyingly creepy moments, but they are variations on a theme done many time over, and, as such, they don’t offer many suprises.

The second story, “The Life of Chuck,” is the most original, and it offers some of the scariest and sweetest moments of any of the stories. It begins with the world coming to an end, as the Internet goes down, communications become frayed, and life as we know it generally falling apart in a way that felt much too real. All the while, every place the characters go, they are haunted by a message thanking a man named Chuck for 39 great years. Then the story steps back in time, and Chuck is a businessman at a conference who suddenly is struck with the urge to dance in the street to a busker, and then Chuck is a kid, in a house with a haunted cupola. The story doesn’t really make sense, and I’m not sure the three sections hang together, but I liked the ideas in it. It felt like King was just playing with ideas.

The novella, “If It Bleeds,” focuses on Holly Gibney, a character from the Bill Hodges novels and The Outsider, as she searches for a man who seems much too connected to tragedy and death. This story really took a while to warm up because so much of it, especially early on, references the works where Holly previously appeared, and I haven’t read those. Once the novella began to focus on the present story, it was pretty good. But I think it would have been better if it had cut back on the many references to other works. Some of the background was necessary, especially as it informed Holly’s suspicions in the current story, but some of it felt like fan service. (Something I might have appreciated if I’d read the other books!)

I tend to love King’s novels more than his short works, but I like to dip into the shorter works once in a while, as they do tend to be pretty engaging, as these were. But these stories don’t show King at the top of his game, even as a short story writer. They’re fine, but not his best.

This entry was posted in Short Stories/Essays, Speculative Fiction. Bookmark the permalink.

7 Responses to If It Bleeds