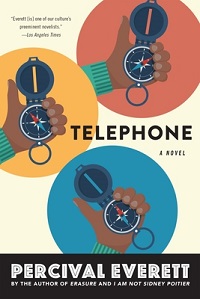 After reading Telephone, I’ve found myself wondering why I don’t hear more about Percival Everett’s writing. I was introduced to his work through the 2018 Tournament of Books, where So Much Blue competed, and then I heard nothing more about him until Telephone was selected for this year’s conversation. He’s written more than 20 books and is considered by some to be a major American novelist, but his books stay under the radar (at least under my radar). It’s too bad because he’s a good writer, and Telephone is a very good book, even without the big gimmick surrounding its publication. (More on that later.)

The narrator of Telephone is Zack Wells, a paleobiologist with a kind of dull but pretty okay life, until his 12-year-old daughter starts having what looks like seizures. At the same time, he finds a message in the pocket of a used jacket he bought online — “help me” in Spanish. So he’s got a possible crisis in front of him and a possible crisis far away, all as life and work, with all their typical dramas continue plodding on.

One of the things I liked about this book is that Everett tells a clear and straightforward, but emotionally complex story that is peppered with little extras that readers can choose to pursue or not. For instance, one chapters includes the codes for chess moves between sections and another German sayings. I’ve gathered from the small amount of reading I’ve done about the book that these are often significant, but they can also be easily ignored if you just enjoy the story and the writing, which was the case for me. The rabbit hole was there if I wanted it, but I was disinclined to go down it. And that worked out just fine.

Another big rabbit hole is that the book was published in three separate versions, all with slight variations to the story. The biggest change that I’m aware of comes at the end, although I understand that there are some other, smaller differences throughout the text. The idea, I think, is that no two readers experience a book in the same way, and once it is in the reader’s head, it is that reader’s experience. And when two readers try to talk about the book together, they may find that they have entirely different perceptions of how the book works. It’s like a game of telephone, where the author speaks, the reader speaks, and the message at the end is altered. Everett is making that difference literal.

As it happens, I ended up through an ordering glitch with two copies of the book, each a different version (you can tell by looking at the compasses on the cover or the color of the logo on the spine). I did look at the different endings, and they were really different, with one of them pretty dark and the other almost a sigh of relief. I didn’t look further into the differences because, to be honest, I don’t care. It is sort of a gimmick, and although I find it interesting as a way of getting readers to think about how subtle differences affect their experience of a book, I was perfectly content with the experience I had.