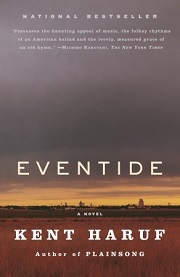 Back in February, I read Plainsong by Kent Haruf and loved it. I had every intention to get to the next book in the series within a month or two but, alas, the pandemic intervened and I’m only just now getting to Eventide. It’s every bit as good. Like Plainsong, this book tells stories of the people of the fictional small town of Holt, Colorado.

Most of the characters in this book are new to the story, although the McPherson brothers and Victoria Roubideaux return. For me, they function as the emotional core of the story, so I was glad to see them back. And the long evolution of their lives makes it helpful to read Plainsong before Eventide, even if they are among the only characters to appear in both books. Along with the brothers and Victoria are Luther and Betty Wallace, a couple getting by on food stamps but struggling with illness and how to take care of their kids. There’s also young DJ Kephart, who lives with his elderly grandfather and befriends Dena and Emma Wells, who live nearby. And there are plenty of supporting characters, like teacher Tim Guthrie, a central character from Plainsong, and Rose Tyler, the social worker whose life ends up connecting with multiple stories.

This is the third book by Haruf that I’ve read, and I find his work immensely comforting, even if horrible things happen in the books. This book is not lacking in tragedy at all. There’s a sudden and violent death and a shocking incident of child abuse with long-term devastating consequences (consequences that are both unjust and seemingly unavoidable). Yet I felt comforted by it in the end. Part of it, I think, is that it shows people persevering, just continuing to go on in spite of tragedy. Sometimes tragedy even opens new doors, although that fact is never presented in a sentimental way or in a way that feels meant to erase the pain. I think, too, that Haruf shows great tenderness toward his characters. I can think of only one who seems open to scorn and that’s because he intentionally inflicts pain.

The depiction of Luther and Betty is an example of Haruf’s tenderness toward his characters. They are struggling and not always doing a good job of managing in their struggles. Their poverty is not depicted in some romantic way, in which you get the sense that their children would have perfect meals and everything would get done beautifully if they only had more money. They genuinely don’t seem to know what to do a lot of the time, as becomes evident when we see them discussing how to apply what they’re learning in a parenting class they’ve been required to take. And they have some undefined health issues that make it hard for them to do more than the bare minimum, if that — yet it’s never quite clear if the health problems are to some extent an excuse or if the continued difficulty managing them is really a sign that the system isn’t providing adequate health care (or a little bit of both). Yet, in all of this, in the narrative they are treated with dignity. Some other characters condemn them, but Haruf simply shows us what they do and say and lets us as readers feel how we feel. My own heart broke for them because, especially in the scene after the parenting class, I could see that they were trying but were simply at a loss.

I also must say a few words about Haruf’s prose. It’s extremely crisp. He uses short, but descriptive sentences to tell us what the characters do and say. We don’t get a lot of their thoughts unless they are actually deliberately thinking those thoughts, yet we generally know what the characters are thinking. It’s remarkable how much Haruf packs into his sentences. Here’s a sample, from early in the novel, after the McPheron brothers have dropped off Victoria and her daughter Katie (who have been living with them) in Fort Collins, where Victoria is beginning college:

Then they drove home in the pickup. Heading east away from the mountains and the city, out onto the silent high plains spread out flat and dark under the bright myriad indifferent stars. It was late when they pulled into the drive and stopped in front of the house. They had scarcely spoken in two hours. The yardlight on the pole beside the garage had come on in their silence, casting dark purple shadows past the garage and the outbuildings and past the three stunted elm trees standing inside the hogfencing that surrounded the gray clapboard house.
In the kitchen Raymond poured milk into a pan on the stove and heated it and got down a box of crackers from the cupboaard. They sat at the table under the overhead light and drank down the warm milk without a word. It was silent in the house. There was not even the sound of wind outside for them to hear.

It just cast a spell on me. The descriptions of food are especially note-worthy throughout the books, even though, as in this example, it’s often very simple food. The way Haruf writes about it is often so revealing of character.

I loved this book and hope to read Benediction by the end of the year. If you haven’t read Haruf, I encourage you to give his books a try. I started with Our Souls at Night and do recommend that or Plainsong as a great place to begin.