July Reading (a week into August)

Happily, I was able to do much more reading in July than I did in June! A lot of it was an exploratory sort of reading — will I enjoy this? What about this? — and some of it was just for the pleasure of reading something I knew for sure I would like. Here it is: 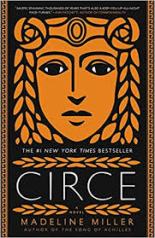 These are the books I read in a more exploratory spirit. I’ve already talked about The Changeling, and I’m going to write about Beyond Black separately, because it was a stunner, so I’ll write about the rest of these briefly.

I feel like I must have been the last person on earth to read Madeline Miller’s Circe. Everyone I know here has read it (partly because it was the book for our public library’s Spokane Reads last year, but still.) But even late to the game, I liked it quite well. I was a big mythology buff as a kid, and it was so enjoyable to see this one retold from a different point of view. I especially liked the bits where Circe invents witchcraft, and the bits about the deep-sea creature who provides the poison for the spear. (Don’t mess with what’s in the deep sea! It’s my personal motto!)

I had kind of given up on seeing much more writing from John Crowley, who is one of my all-time favorite authors, and so I was entirely delighted to see & Go Like This, a book of his short stories. Reading them was such a satisfying experience; I loved them. My favorite of them was a novella called “The Girlhood of Shakespeare’s Heroines,” which is a love story and a story about invisibility and disability and connection and disconnection and what endures and why.

The third volume of the graphic novel of American Gods was… a bit more-of-the-samey. Perhaps I should have re-read the first two volumes, to get the momentum back? I really like the novel, and I liked this as well, but reading it on its own lacked some of the oomph of my memory of the end of the book. The art is eerie and terrific, though.

The only nonfiction I read this month was Desmond Tutu’s The Book of Forgiving, which I read for my book club. Despite the fact that Tutu is an Anglican archbishop, this book is written for a broad audience — for people of any religious background or none. Of course he references his own faith at times, but his premise is that forgiveness is necessary for society, for healthy relationships, and for our own mental flourishing. Taking examples from the very personal to the national and international, Tutu shows both the necessity and the way forward to forgiving and being forgiven, even in situations where forgiveness might seem impossible. I started reading this quite skeptically, but I think this is a very good and relevant book.

These are the books I read, knowing they would be enjoyable and relaxing!

Despite being a Constant Reader as a child, there are many authors and series I never even touched. Noel Streatfeild is one of those. So I finally tried Ballet Shoes (as her most famous) and The Bell Family (for good measure) to see what it was like! What a pleasure. The realistic details about the theater and dancing, the bits about ego and vocation and family, the way the genteel poor scrape and make do, and a sort of feminism (in the sense that the girls should be able to support themselves and want to make a name for themselves in the history books) — it was all so much fun. I’ll add that I watched a superb adaptation of Ballet Shoes, with Emma Watson in it, and that was just as much fun as the books.

It took me a long time to take Other Jenny’s recommendation and read Hilary McKay’s Wishing for Tomorrow, which is (if you will believe it) a sequel to Frances Hodgson Burnett’s A Little Princess. Never would I ever have thought that another author’s sequel to a classic that I’ve read one meelion times would be so wonderful, except if Other Jenny had recommended it. This sequel has Ermengarde as a main character, but also helps us understand the inner lives of Lavinia, Lottie, Jessie, and even the dreadful Miss Minchin. It was partly a perfect homage to the original, and partly a perfect work of its own.

I tried Miss Read’s Village School because I was listening to the Backlisted podcast (this is the only podcast I listen to; does anyone else listen to it? It’s fab) and they mentioned her and I realized I had heard of her many times and never read any of her many, many, many books. This is the first of her Fairacre series, and she has another series about Thrush Green. Both series, I think, are about a certain view of English country life. This book was about as… er… peaceful as you can get: school opens, schoolmistress is replaced, there’s a harvest fair, someone has a baby, Christmas happens, spring happens, we play cricket, there’s a parish fete, summer happens, school’s out, someone gets married, the end. If this is the sort of thing you like, you’re going to like this very much. I liked it… okay? I guess? I was bored nearly to sleep, but it was fine. I did notice that it was extremely classist, in the sense that the schoolmistress and the vicar and a couple of other people are “we” and most of the people who go to the village school are “they” even if they are trying hard to make some money and have extra things (including a good education) for their children. There’s also some racism in the form of some “gypsy” children, who I suppose are extra “they.” This was not very pleasant to read even over the course of about 200 pages, but if you can ignore it, I’m sure it’s very much “how we used to be” and all that. I see that often enough where I live to recognize it.

I have been reading Laurie King’s Russell-Holmes mysteries since 1996, and all these years later, Riviera Gold did not disappoint! This sixteenth (!) installment in the series, about a mystery in Monaco, showed how well this sort of thing can be done: it filled new readers in on the situation without copy-pasting phrases or paragraphs from other books; it settled into a comfortable partnership without feeling boring or worn-out; it used an interesting setting and even real historical people without making them the central focus of the mystery; it used intelligence and danger and wit and cups of tea and balanced them all like spinning plates. I love this series. If you’ve never read them, start with The Beekeeper’s Apprentice and see if it’s for you.

As for August, I’m nearing the end of Moby Dick, so that’s going to be a whopper! Watch this space! Let me know what you’ve been up to, as well!

9 Responses to July Reading (a week into August)