June Reading (a week into July) 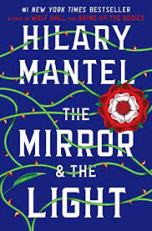 I don’t seem to have read very much in June, not nearly enough. I did finish the Wolf Hall trilogy, which I’m going to write about separately, and that did mean that overall I read nearly two thousand pages about the Tudors, but somehow that doesn’t seem to account for all my time. Like Teresa, I have also been watching The Americans (it’s excellent and very complex and pretty unpredictable, and I recommend it if you don’t mind a reasonably dark show in These Times, but I will say as my one criticism that it has almost no humor whatsoever.)  Like Teresa, I have also taken up a new hobby (mine is knitting rather than crochet, and I am a very slow, very novice knitter. But I am having fun with it. I’m almost done with a fairly large blanket that I started literally years ago, and I’m about halfway through with a scarf. Nothing fancy. But it’s nice to be doing something with my hands. And I like pursuits that make me feel connected to other people down the years, like bread-baking and putting babies to sleep and making jam and bird-watching and things like that.

In any case. Here’s what I did read, besides the Mantel: one of my friends and colleagues in the English department asked me to read a novel he’s written and give him feedback, and I did. I can’t tell you about it because it’s not published yet, but it’s almost there. I will say that it was very good, and I thoroughly enjoyed reading it, and not just because I know the author, and I hope it gets published and is a hit, and if that happens I will cheerfully tell you all about it here and nag you to read it.

Then I read Ways of Going Home, by Alejandro Zambra. This is translated from the Spanish — Zambra is a Chilean author — and the translation is terrific. It’s a layered story that starts out about a child in an earthquake in Santiago, and the consequences of that night among his neighbors and family members. Then the second part is about the author of the story about the earthquake, and his girlfriend. Then the third part is about the author of the second part, and his musings on his memories. The whole thing is so cleverly done, about memory and forgetting and nostalgia, about the city of Santiago itself, about who has the right to remember certain things and whose memories are allowed to dominate in a culture that has a dictatorship in its near past. It has a light touch in its style, but its themes are vital, and even though it’s a short novel — less than 200 pages — it sticks with you long after you close it.

Finally, I read Mink River, by Brian Doyle. I read this for my book group, and I never would have read it if it weren’t for the group (one good reason to be in a book group!) The book is about a smallish coastal town in Oregon, and a fairly large cast of its inhabitants, including its birds and animals and the Mink River itself, which runs through the town to the sea. The people are mostly scraping by; there’s a doctor and a sculptor and a teacher and a logger and a couple of old guys who work for the Public Works Administration, some kids, a cop, a bartender, some deep-sea fishers, a nun, a talking crow, and so on. The book runs, like a river, from one consciousness to another, letting us see through each person’s eyes, letting us dwell in their hopes and worries and banal thoughts about what’s for dinner and criminal desires and small joys. The events of a small town take place: birth, death, injury, hiking, picnics, adultery, loss of a job, inheritance, depression, sight of a moose.

When I first started this book, I did not think I was going to like it much. Its style is, shall we say, unusual. I thought it was going to be much too twee for me, way over the line into purple prose. But about twenty pages in, I found myself unexpectedly moved to tears… and I decided to go ahead and stop fighting the style and give it a chance. I wound up really loving it, and all its strange wondering insight into human hearts. It’s not a long book, and that’s probably for the best, but for something that never, ever would have crossed my path if not for my book group, I am so glad I read it.

And that’s all for June! I will hope to have more to show for myself in July!

4 Responses to June Reading (a week into July)