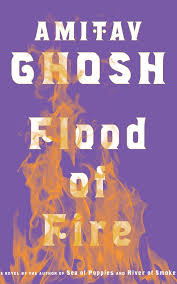 Back in 2011, I read the first two volumes of Amitav Ghosh’s Ibis trilogy: Sea of Poppies and River of Smoke. The first is set mostly in India in 1838, and the second mostly in Canton just afterward. Both volumes have an enormous cast of characters and draw on a sometimes-bewildering variety of cultural identities: here there are dozens of different races, religions, castes, languages, national identities, economic classes, vocations, and walks of life. What draws them together is opium.

The books are steeped in it. Deeti is a poor opium farmer in India. Raja Neel Rattan is an opium plantation-owner. Zachary Reid is a biracial sailor on the Ibis, whose ability to pass for white means his ability to advance in his chosen calling; the Ibis is transporting workers who can grow opium on the island of Mauritius. Benjamin Burnham is a white British opium-trader. Paulette Lambert is a young French woman who lives with the Burnhams, and whose fate is determined by the Burnhams’ prosperity. Bahram Modi is a Parsi opium trader in Canton, one of the few non-white traders accepted by the British enclave in Fanqui-Town. Ah Fatt is at first an ahkeemfor (an opium addict) and then much more as the story develops. And these are just a few of the characters, who for the most part are developed, engaging, and often quite funny.

One of the most wonderful things about the books, especially the first two, is their exuberant use of language. Ghosh uses words from Hindi, Mandarin, Cantonese, Bangladeshi, Urdu, and many more languages that come together in a kind of opium-creole. It’s joyful and experimental and sometimes hard to understand; entering into it in the spirit of the thing is like going to these places and eating the foods you’re offered rather than demanding a hamburger.

I re-read the first two books in preparation for finally reading Flood of Fire, which came out in 2015. (I know, I’m years late, it’s not as if I haven’t been reading anything in between.) The first two were as good as I’d remembered. They have a strong sense of the wheel of fate: kings become peasants and peasants become kings, all because of the flood of opium rushing through. There was depth to the characters, and I wanted more. The second book had a bit of a heavy hand, carefully s-p-e-l-l-i-n-g out how the British were the villains, and I think I probably could have been trusted to understand that by myself, without all the lecturing about Free Trade and its Evils, but still, it was a refreshingly excellent read in many ways.

Sadly, Flood of Fire did not live up to the first two. It spends almost the first 250 pages on an affair between two of the characters, which is not only vulgar (and full of embarassing “tee hee” moments, my Lord) but incredibly boring and tiresome. Once we finally extricate ourselves from that morass, and something begins to happen, the book divides itself between the moral decline of one formerly favorite character (acceptable if given motivation, which it isn’t) and a lot of very dull battle scenes (historically accurate I’m sure, but preserve me, this isn’t what I signed up for.) Ghosh’s epilogue makes it clear that he wanted to take the books much farther into the historical record, but got bogged down in detail (perhaps… in 250 pages about a very unoriginal affair?) and now those books won’t be written. What a shame.

If you’re interested in reading these, of course try the final one if you think it might be to your taste, but I might actually recommend just reading the first two. They’re very entertaining and rewarding, and even make good re-reading fodder.

This entry was posted in Fiction, Historical Fiction. Bookmark the permalink.

1 Response to The Ibis Trilogy