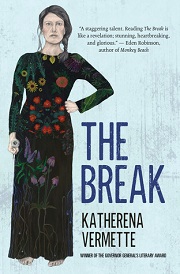 Katherena Vermette’s novel, The Break, is the story of an Indian community and a crime that connects them. It begins with Stella, a Métis woman, who sees a woman being raped in the area by her house that she calls “The Break.” That same night, her teenage cousin, Emily, goes with her friend Ziggy to a party in hopes of drawing the attention of Clayton, a boy at her school. Emily’s mother, Paul, and her aunt, Lou, are figuring out their own relationships with men. Meanwhile, another young woman named Phoenix escapes from juvenile detention. Tom, the Métis police officer called to look into the case with his more experienced white partner, is only just starting to think about his identity and, perhaps, what it means to his work.

Each short chapter in the book looks at events from a specific character’s point of view, and as each character’s link to the crime becomes clearer, the tragedy gets darker and darker. Vermette gradually reveals moments in these characters’ pasts that connect them to each other and shows how their connections to their community faded, even if their intense feelings for each other did not. For this is a book about bonds that last beyond time and distance. And it manages to be about that without getting soppy or sentimental. The focus instead is on strength, enduring through tragedy.

I was especially interested in how Vermette managed the story of the perpetrator of the rape Stella witnesses. That person is a character in the novel, and Vermette manages to make it clear in no uncertain terms that the crime is a wicked and inexcusable act of violence while also recognizing the perpetrator as a human person with a history, not a pure monster. The dramatic focus, however, remains on the victims, on all victims, past and present. They and those who support them are the ones with strength and courage.

This entry was posted in Fiction, Mysteries/Crime. Bookmark the permalink.

6 Responses to The Break

Leave a Reply to Jenny @ Reading the End Cancel reply