My Wars Are Laid Away In Books 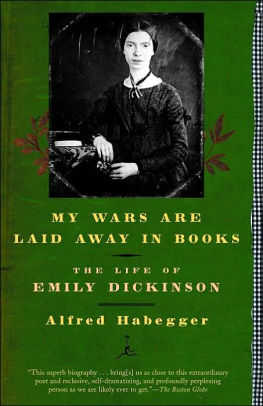 This biography of Emily Dickinson, by Alfred Habegger, has been on my TBR for so many years that I’ve lost count — the oldest book on my list, in fact, having survived a number of TBR purges. I read it with a collection of Dickinson’s poetry by my side, and I found it revealing and fascinating. Though in the end, Dickinson was such a strange and intense person that she remains a mystery, and thankfully Habegger allows her that.

Naturally enough, the biography begins with the founding of Amherst, where the poet lived, and her first ancestors. We get to see a lot of the sort of people her parents were, and how they met and courted, and what sort of marriage they developed; her siblings; the sort of people who made up “society” in Amherst’s town and church; the Amherst Academy that Dickinson’s father helped found.

Later, of course, there are all the details about the poet herself: her intense, often unrequited friendships, her correspondence with the older men she saw as her guides and mentors, the heavy losses of people she loved (so much tuberculosis, geez), her struggles with religion, and the flowering of a poetry that must stand as something unique in American literature. Emily Dickinson wrote from a paucity of personal experience. She almost never traveled, saw few people outside her small family circle, received a modest amount of education, and read the books she had access to. None of that can account for the naked power of her poetry: the shock of encounter, the confrontation with delight, the struggle with sorrow, the persistence of immortality. She was a flame, and this biography reveals that she knew she was. She wasn’t interested in fame (something her father heavily shaped) but she recognized and loved great women: Elizabeth Barrett Browning, George Eliot, the Brontës. And she knew that greatness in herself as well. How did it happen? No one around her could say. Beauty and fierceness come where they will.

This biography had its quirks. Habegger did an excellent job at describing the hothouse fervor surrounding revivals in the 19th century, and the intense pressure to be “saved.” This was fascinating for me to read, because in my denomination, this doesn’t exist; intellectual assent and love for neighbor are enough, and there isn’t any pressure to have an emotional moment you can point to. The pervasiveness of this necessity in Dickinson’s world, framed as a struggle for her eternal life, must have been overwhelming as her friends and family members were “saved,” one by one, and Dickinson held out. But Habegger portrays these conversions, especially her brother’s, as personal betrayals of Dickinson. Surely that’s ridiculous; they would have had both personal and social elements, but without much real reference to the poet. Habegger also displays a fair amount of personal dislike for Dickinson’s sister-in-law Sue, who as far as I can tell made the best of a very odd situation that got worse as time went on. (Not only did Dickinson get more reclusive and weirder, Sue’s husband acquired a young mistress and installed her in the house next door. No need to blame Sue here.)

Other than that, however, the biography was well-written, straightforward, and interesting (and the arguments with other scholars in the footnotes were highly amusing.) Perhaps the best part about it was how intimately linked it was to Dickinson’s poetry. Habegger laced every chapter with dozens of references to specific poems, often quoting them at length. I loved having the collection at my side so I could read the poems he only referred to, as well. It was a wonderfully immersive experience that taught me something about the real power of this poet, apart from her most frequently anthologized pieces. If you’re interested in this strange, folded-away struggle of a life, I definitely recommend this biography.

This entry was posted in Biography, Nonfiction. Bookmark the permalink.

7 Responses to My Wars Are Laid Away In Books