Who Could That Be at This Hour? 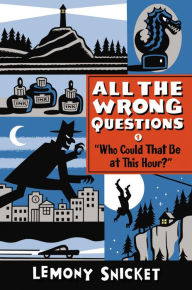 I love Lemony Snicket’s books. I devoured the Series of Unfortunate Events, and thanks to a generous cousin, I even own one of the books in French, which is as delightful as you might imagine. Their combination of gloom and basic decency, their devotion to bringing some sort of order and compassion out of evil and chaos, their unexpected, rather adult sense of humor that is nevertheless based on a child’s experience, make them — I think — Novels for Our Times.

So when I discovered a different Snicket series (so far only lightly connected to the SoUE — but I have Theories), I sprang upon it. The series is called All the Wrong Questions, and the first volume is Who Could That Be at This Hour? In it, Lemony Snicket himself is the 14-year-old narrator and main character. He has received a peculiar education (the details of which we are not given) and is now sent to be the apprentice of one S. Theodora Markson in a town called Stain’d-by-the-Sea. Markson and Snicket are asked to retrieve a statue of a nasty legendary creature called the Bombinating Beast from one local family and restore it to another. Easy, right? WRONG. There is much more going on than meets the eye, including kidnapping, theft, betrayal, lies, impersonation, bumbling local law enforcement, and the always-unpleasant question, “Where is that screaming coming from?”

This book was entirely enjoyable. It was strange and menacing and full of cliffhangers, but it was also extremely funny. My favorite thing about it was that it was packed with literary references, some so obscure that children would never get them. There are two teenage taxi drivers (their father is sick) named Bouvard and Pecuchet Bellerophon. There are several scenes in which Lemony Snicket is passing the time and picks up a book. I loved them all:

I was in the mood for something I had read already, and for an hour I sat in my usual spot and read about someone who was a true friend and a good writer who lived on a bloodthirsty farm where nearly everyone was in danger of some sort.

Or the part where he tells Bouvard and Pecuchet that The Long Secret is better than the one that comes before it. It made me want to read them both again and decide for myself. Any book that makes me want to read other books is a good book in my book.

I can’t wait to read the others in this series. Lemony Snicket, may your shadow never grow bulkier.

This entry was posted in Children's / YA Lit, Fiction. Bookmark the permalink.

4 Responses to Who Could That Be at This Hour?