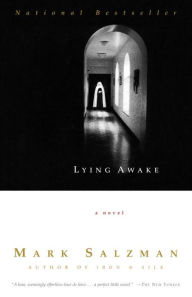 Lying Awake is a short novel — under 200 pages — and it has a lot to say. Still, it manages to feel quiet rather than crowded, and measured rather than rushed. Quite an accomplishment for such a small book.

It tells the story of Sister John, a modern-day Carmelite nun living in a convent tucked in a corner of Los Angeles. When she first joined the community, she spent arid years waiting to feel God’s presence come closer, and, since she didn’t, she took it out in action, serving the other nuns with a fervor she couldn’t quite feel in her heart. But a few years ago, Sister John began to feel God’s love and closeness, first in small ways, and then in overwhelming ecstasies, causing her to fall up, like a stone into the sun. Nothing has ever been more certain, more fulfilling, or more joyful. Faith is the smooth path now, and she has written a successful book of poetry about her experiences. Everyone in the convent rejoices for her, even though every nun’s way is different.

When Sister John discovers that the headaches she’s been having are caused by a health condition that’s associated with religious fervor, though, she’s devastated. Was her closeness to God ever real? If she cures her illness, will she “cure” her faith? What is God’s love? What is medicine meant for? If she has to go back to the dry years, will she survive it? These questions, and many more, turn and return at the heart of this book.

Mark Salzman has a clear understanding of the kind of questions a faithful person might ask herself in this situation. Lying Awake is grounded in the evidence of the way of life of people who have dedicated themselves to faith and to living in community — not always the easiest proposition. There’s scripture here, and also history: Augustine, Teresa of Avila, Térèse of Lisieux, St. John of the Cross, and many others. Salzman doesn’t allow pat answers. Even the very end is, to my mind, ambiguous. But that’s faith and hope for you: if you know the ending, they aren’t necessary.

I’ve only given the bones of the book here. It has a lot more to offer, from Sister John’s relationship with her doctor to the rhythm of life in the convent. If this book sounds at all appealing to you, I do recommend it — you could read it in an afternoon, and it will tag along at your side for days, making you think about it at odd times. It did for me.

This entry was posted in Fiction, Religion. Bookmark the permalink.