The Mistress of Alderley 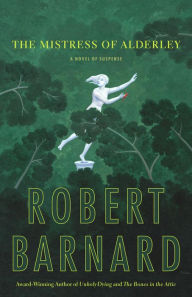 Caroline Fawley has retired from doing sitcoms and theatre — “Thank God!” she says. Her charming, attentive partner, Marius, has set her up in a lovely manor in the small town of Alderley, near Leeds, as his mistress. He is still married — “only in name, darling” — so she only sees him on weekends, but the arrangement suits her perfectly. One weekend, they go to see Caroline’s oldest daughter, Olivia, sing the lead role in a Verdi opera — but Marius steps out for a breather in the interval, and never returns. Detectives Mike Oddie and Charlie Peace must try to get to the bottom of the many, many layers of secrets in the lives of the suspects, and especially of the victim, before they can find out what happened.

I’m always on the lookout for good mystery authors. Robert Barnard has written at least thirty mysteries, maybe more, and this is the first one I’ve read, picked at random because it was one of the two or three my library had on the shelf. And oh, did I enjoy it. The writing isn’t elegant, but it’s fluid and funny, with sly jokes sprinkled everywhere. The structure is terrific and unusual, with over half of the book passing before the crime occurs, so we really get to know the characters before the detectives come on the scene. I like this — the book doesn’t focus on the detectives’ lives and struggles, it focuses on the crime, and the people involved. And the characterization is great. The book gently lampoons Caroline, with her blind spot when it comes to love; the people in the village of Alderley; Caroline’s three sarcastic children; Marius himself, and the various surprises we keep uncovering about his life. I didn’t want to put it down.

And just because the mystery doesn’t focus on the detectives doesn’t mean they’re boring. We spend more time with Charlie Peace, a black detective, than with Mike Oddie. Peace is observant and wry, and there are several sharp exchanges about race in the book along with the detection. I also liked the setting, partly in Alderley and partly in Leeds.

Overall, I was so pleased to have picked this up. I will certainly be looking for more of Barnard’s work. What fun.

This entry was posted in Fiction, Mysteries/Crime. Bookmark the permalink.

2 Responses to The Mistress of Alderley