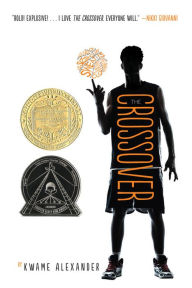 I’ve mentioned my book club with Matthew several times already this summer. The Crossover, by Kwame Alexander, was one of the books I put on my list for him to pick from, and I was really glad we got to it before summer was over.

This book, told entirely in verse, is about 14-year-old twins Josh and JB Bell, both of whom are heart-and-soul devoted to basketball. Josh (aka “Filthy McNasty”) is the narrator, and he’s writing in verse because that’s the way he thinks: rapping, rhymes, this-and-that, that-and-this. Their adored dad, Chuck “The Man,” was a basketball star in his time, one of those guys who goes to Europe to play, but a knee injury kept him from going pro, so now he coaches his sons and watches out for the family. Their mom is the assistant principal at their junior high school (yikes!) so they have the kind of standards you might expect: their academics have to be at the top of their game if they expect to stay on the team, and they have to be family rock stars, too.

This book builds by pieces, poem by poem. We get to see what happens as JB finds a girlfriend (what happens when one twin gets a girlfriend and the other one doesn’t? Friction, that’s what.) We see the explosive love of the game in both twins, and their dad too. We see Josh’s worry about his dad, who has insanely high cholesterol but a dread of going to the doctor. We see the tenderness in the family, and the prickly independence and interdependence of twins who are alike-but-not-alike. We see the intimacy of family. And the poetry isn’t just a device in this book, it’s the point.

Alexander plays with the metaphor of the crossover in this book. I’m not a sports fan (like, at all) but Matthew is, so he was able to show me what one looks like in basketball! But the idea of crossing over — from childhood to young adulthood, from one phase of life to another, and even from life to death — is everywhere here.

This book won a Newbery medal and a Coretta Scott King Award, so I’m not the only person who appreciated it. But I thought it was wonderful, and not just for the athletes in your life. It was funny and interesting and out-there and bold, and also gentle and vulnerable and poetic. Highly recommended.

This entry was posted in Children's / YA Lit, Fiction, Poetry. Bookmark the permalink.

2 Responses to The Crossover