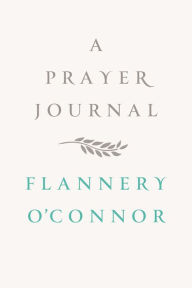 When Flannery O’Connor was a very young woman, just twenty-one, she went to the University of Iowa for a year to participate in the Iowa Writers’ Workshop. She was a devout Catholic, and during that year or so, she kept a prayer journal in a ruled notebook. This journal has been published. It’s of interest partly because Flannery O’Connor’s stories do so often have to do with her faith, of course, but also because her thoughts on faith so often have to do with her writing.

Most of her prayers (as you would imagine) are very earnest: pleas for grace, supplications for help, requests to love God and her fellow beings more. Some are humorous, smiling at her own earnestness. O’Connor was more self-aware than a lot of twenty-one-year-olds:

I don’t want to be a coward, staying with You because I fear hell. I should reason that if I fear hell, I can be assured of the author of it. But learned people can analyze for me why I fear hell and their implication is that there is no hell. But I believe in hell. Hell seems a great deal more feasible to my weak mind than heaven. No doubt because hell is a more earthly-seeming thing. I can fancy the tortures of the damned but I cannot imagine the disembodied souls hanging in a crystal for all eternity praising God. It is natural that I should not imagine this. If we could accurately map heaven some of our up-&-coming scientists would begin drawing blueprints for its improvement, and the bourgeois would sell guides 10¢ the copy to all over sixty-five. But I do not mean to be clever although I do mean to be clever on 2nd thought and like to be clever & want to be considered so. But the point more specifically here is, I don’t want to fear to be out, I want to love to be in; I don’t want to believe in hell but in heaven.

Even in her private prayers, she couldn’t bear the least hint of cant or sentimentality. It all boiled down to grace, for her.

Many times, she refers to her writing, with a kind of desperate love for it, thoroughly mixed with her love of God:

Dear God, tonight it is not disappointing because you have given me a story. Don’t let me ever think, dear God, that I was anything but the instrument for Your story—just like the typewriter was mine. Please let the story, dear God, in its revisions, be made too clear for any false & low interpretation because in it, I am not trying to disparage anybody’s religion although when it was coming out, I didn’t know exactly what I was trying to do or what it was going to mean. I don’t know now if it is consistent. Please don’t let me have to scrap the story because it turns out to mean more wrong than right—or any wrong. […]

Oh dear God I want to write a novel, a good novel. I want to do this for a good feeling & for a bad one. The bad one is uppermost. The psychologists say it is the natural one. Let me get away dear God from all things thus “natural.” Help me to get what is more than natural into my work—help me to love & bear with my work on that account. If I have to sweat for it, dear God, let it be as in Your service. I would like to be intelligently holy. I am a presumptuous fool, but maybe the vague thing in me that keeps me in is hope. […]

But how eliminate this picky fish bone kind of way I do things—I want so to love God all the way. At the same time I want all the things that seem opposed to it—I want to be a fine writer. Any success will tend to swell my head—unconsciously even. If I ever do get to be a fine writer, it will not be because I am a fine writer but because God has given me credit for a few of the things He kindly wrote for me. Right at present this does not seem to be His policy. I can’t write a thing. But I’ll continue to try—that is the point.

I find this fascinating, just as a window into O’Connor’s point of view as a beginning writer. Her passion for writing — good writing, fine writing — is consuming. She doesn’t think much of her own intellect (perhaps this is a result of being at the workshop in 1946, which I am presuming was male-dominated in some of the particular ways academia was in those days), but she doesn’t seem to have much doubt that she’s meant to write, and that she wants to do it for motivations that are beyond what psychologists tell her are the “real” ones. As she wrote this journal, she was shaping Wise Blood, and bringing it in to the workshop to be examined.

O’Connor abandoned this journal after 18 months. She had her first attack of lupus — the disease she suffered from all her life, and  that killed her at the age of 39 — three years later. Most of the evidence of what she thought about grace and judgment and mercy (and race and class and a lot of other things) is in her stories and letters, rather than in journals. But if you are interested in a glimpse of the writer O’Connor would become — if you are interested in the way she was thinking as she was forming her ideas on how to write as a Christian for the rest of her life — this brief book (which includes a replica of the original handwritten journal) may interest you.

This entry was posted in Nonfiction, Religion. Bookmark the permalink.