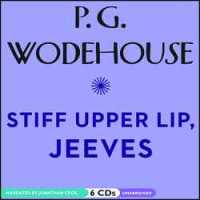 Bertie Wooster is in trouble again. His friend Gussie Fink-Nottle’s engagement to Madeleine Bassett looks likely to end, leaving Bertie to face the grave danger of having to do the gentlemanly thing and marry Madeleine Bassett himself. Unable to bear the possibility of spending his life attached to a woman who thinks stars are “God’s daisy chain,” Bertie decides to go to Totley Towers, home of the Bassetts, and try to bring about reconciliation. Visiting Totley is not a trivial matter for Bertie. The last time he visited, there was no end of trouble when he tried to nick a cow creamer for his uncle’s collection. Can he avoid further trouble on this visit? Or will his valet Jeeves be forced to rescue him from yet another ridiculous caper?

I first discovered P.G. Wodehouse and Jeeves and Wooster in college by way of the Hugh Laurie and Stephen Fry television series, which was playing on Masterpiece Theatre at the time. I laughed myself sick at several episodes and proceeded to read—and laugh myself sick at—several of the books. But as so often happens, I let Wodehouse fall to the back of my mind and didn’t read any more Jeeves and Wooster (let alone any of his other books) for years.

Stiff Upper Lip, Jeeves is the ninth Jeeves and Wooster novel. Past experience taught me that the order doesn’t matter much when reading these books, but I’d make an exception in this case. The novel is filled with characters from past books; besides Gussie and Madeline, there’s Stiffi Bing, Stinker Pinker, Roderick Spode, and Pop Bassett. In recounting this adventure, Bertie usually provides enough background so that readers can follow the story, but I think the humor is enhanced when you’ve met the characters before. Roderick Spode seems all the goofier when you remember his stint as head of the Black Shorts. And the peril of marrying Madeline Bassett just doesn’t seem so perilous if you haven’t met her before this book. (From Wikipedia, I’ve gathered that Right Ho, Jeeves and The Code of the Woosters are the ones to read before this one.) I’ve rewatched the television series recently enough that I remembered the characters well, so it wasn’t an issue for me. I might feel differently if I were dropped in the middle of the chaos without having seen any of these people before.

As for the humor, it’s pretty typical of a Jeeves and Wooster story. There are misunderstandings, minor incidents that get blown all out of proportion, and people concocting ridiculous schemes but acting as if they were perfectly sensible. I didn’t laugh myself sick over it, but it was sufficiently amusing. I don’t think it was quite as over-the-top as some of the earlier books, but it’s been so long since I’ve read them that I can’t be sure.

I listened to this novel on audio, and it works well as an audiobook. My only complaint is completely unfair. Because the book is written in first person, it’s Bertie himself who tells the story. Jonathan Cecil provides the narration, and he does a fine job as Bertie. But for me, Bertie Wooster will always be Hugh Laurie, and to hear someone else’s voice in the role was disconcerting. I got used to it and was generally pleased, but it took a while. Some of the other characters’ voices were on the cartoony side, but that’s appropriate for Jeeves and Wooster, so it didn’t bother me much.

I’m glad that, thanks to Audiobook Jukebox’s Solid Gold Reviewer program, I finally took the time to revisit Wodehouse. Now I’ll have to make time for more!

This entry was posted in Audiobooks, Classics, Fiction and tagged Review Copy. Bookmark the permalink.