The Color of Earth

This manwha (Korean graphic novel) by Kim Dong Hwa doesn’t fit the usual conception of the graphic novel form. Instead of being an action story or even a memoir, it’s a gentle girl-centric romance. The Color of Earth is the first in a trilogy of novels about the coming of age of a young girl named Ehwa who lives in a 19-century Korean village with her widowed mother. The book begins when Ehwa is 6 years old and learns for the first time of the anatomical differences between boys and girls. The rest of the book traces her growing awareness of love and sex, all with the guidance and support of her mother. By the end of the book, she is 16 and has experienced first love and seen her own body develop into that of a young woman.

The story is beautifully told. The mother-daughter relationship is especially charming. There were a few points when I thought the mother could have been more clear and, well, foresighted in her teaching, but I think much of that comes down to generational differences. When questions and crises did happen, Ewha’s mother was consistently warm and responsive to her daughter.

I especially loved how the mother was given an inner life and her own love story. And the way she handled the customers at her tavern made me smile. She made the boundaries clear without ever seeming uptight or prudish.

And the art! Oh, the art is absolutely luscious: 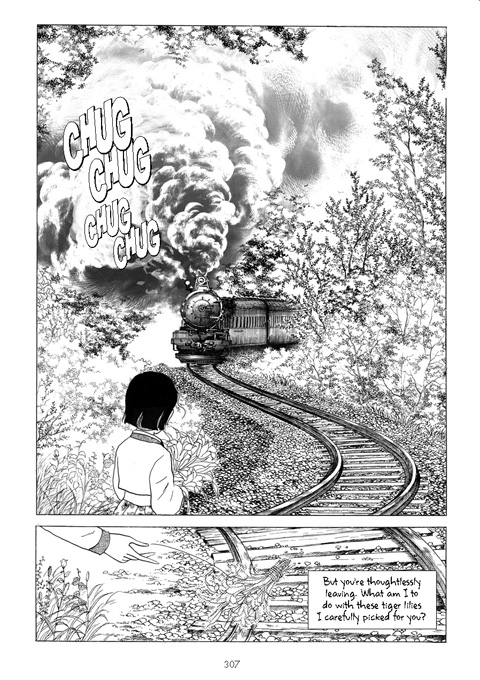 The look is at times extremely naturalistic and beautiful, as you can see in the panels above. Hwa makes great use of the space on the page to pace the story, sometimes with just a panel or two on the page, and sometimes with several panels in quick succession. At times, he does revert to a more cartoonish style, particularly when the characters are having heated conversations. The faces at those moments sometimes reminded me of the faces in anime films that sometimes take on comically unrealistic expressions, despite having an otherwise realistic style.

As much as I enjoyed the book, I did find myself rolling my eyes at some of the poetic chatter about how women are like flowers and how the gourds bloom in the moon as an expression of desire and so on. The fact that the art was so beautiful just about sold it, and it at least kept it from being outright irritating. Plus, I can expect a certain amount of mooning about when the subject of a book is a teenage girl. It didn’t seem out of place, so I didn’t let it detract from my enjoyment.

I’ve gathered, however, from Lu’s thoughts on the trilogy that this kind of thing continues and even gets worse in the succeeding books in the trilogy. When I finished Color of Earth, I had every intention of reading the rest of the trilogy, but now I’m not so sure. If my library carried the next two books, I’d probably give them a try, but I’m not sure about spending money on additional books. I’d love to hear the thoughts of others who have read the whole series.

This entry was posted in Fiction, Graphic Novels / Comics. Bookmark the permalink.

5 Responses to The Color of Earth