Sometimes events transpire that cause us to look back on our lives and think about what has been, what might have been, and what will be. For some, it’s a significant birthday that brings on those thoughts. For others, it’s the death of a loved one. For still others, it’s a major illness. For Godfrey St. Peter, the professor in Willa Cather’s 1925 novel The Professor’s House, it’s his and his wife’s move from an ugly old house to a modern new one. St. Peter finds that he can’t quite let go of his old home despite its “needless inconveniences,” so he continues to work in his old study in his old house, stating that it’s too much trouble to move all his papers while he’s in the midst of a project but perhaps really wanting to put off some of the “unpleasant effects of change.”

The book is divided into three parts. In the first and longest part, “The Family,” we meet the professor, his wife, his two daughters,  their husbands, and a small array of the professor’s academic colleagues. St. Peter seems to love and have a good relationship with his family, but he’s also detached from them. They come to him to talk about their various squabbles, and he weighs in from time to time, but he stands apart from the drama. He’s concerned, but not part of it.

The drama itself is not unusual. Much of it revolves around money and status, as one sister, Rosamond, is wealthy and the other, Kathleen, is not. The family politics here are fascinating. Our families are supposed to be the people who know us best and who love us anyway, but Cather here demonstrates that that’s not always the case. Family members may love one another anyway—in their way—but they don’t necessarily know one another, or at least not completely. There’s always the possibility that something is being held back or misunderstood.

In the background of the family politics, as well as most other relationships in the novel, is a man named Tom Outland. Outland was engaged to Rosamond, but he died in the war. Upon his death, Rosamond inherited the patent for a vacuum tube Tom invented, and which Rosamond’s husband Louis went on to market. The fortune that came from this patent the subject of much intense conversation in the novel, with different parties believing they deserve a piece of it—or at least that Rosamond and Louis (especially Louis) do not. And somehow, underneath these debates is a debate about Tom’s memory. What would he want? What would he expect? And who is in the best position to know and do something about it? 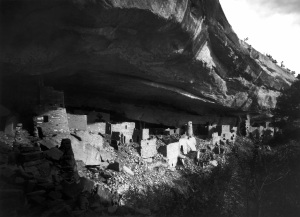 Although Outland’s presence hangs over the first part of the book, it’s not until the second part of the book, “Tom Outland’s Story,” that we get to know the man himself. This short section is Tom’s first-person account of his adventures in the American Southwest, which culminated in the discovery of an abandoned Native American city in the cliffs of a giant mesa.

This was without a doubt my favorite part of the book to read. I have never had any particular desire to see the Southwest, but Cather writes so beautifully of the landscapes there that I almost do want to go (except that it’s really hot—and I hate the heat). Here, for example, is Tom’s first impression of his magnificent find, a stone city with a tower in the center:

It was beautifully proportioned, that tower, swelling out to a larger girth a little above the base, then growing slender again. There was something symmetrical and powerful about the swell of the masonry. The tower was the fine thing that held all the jumble of houses together and made them mean something. It was red in colour, even on that grey day. In sunlight it was the colour of winter oak-leaves. A fringe of cedars grew along the edge of the cavern, like a garden. They were the only living things. Such silence and stillness and repose—immortal repose. That village sat looking down into the canyon with the calmness of eternity. The falling snow-flakes, sprinkling the piñons, gave it a special kind of solemnity. I can’t describe it. Is was more like sculpture than anything else.

Cather gives us a beautiful description that covers not just the look but the feel of the place. And then she has Tom say, “I can’t describe it,” making it clear to the reader that this evocative imagery doesn’t even cover it. It was in this section of the book that I really came to appreciate Cather’s power as a writer.

The final section, “The Professor,” takes us back to St. Peter as he reflects on his life and on Outland’s place in it. The ending is upsetting and uplifting and terrifying all at the same time. I couldn’t decide how Cather wants us to feel about the professor’s state, and I certainly can’t decide how I feel about it.

After I put the book down, I was left with questions: Is the professor having a good life? What constitutes the good life? Is it material possessions? Lack of material possessions? Family ties? Personal freedom? Professional success? And how should we respond when life gives us something other than what we wanted? When is the choice to be happy with something else simply resignation? And what role do others have in governing how we are to be happy? These questions came up repeatedly throughout the book, and every time I thought I had Cather’s own view nailed down, something happened to change my opinion. I love that. It demonstrates an understanding of how complex these questions actually are.

Some might complain that not much happens in this book, and it’s true that it’s only in Tom’s section that there’s anything that could be described as action. The first part is filled with conversation and small domestic and professional conflicts. The last part is almost all internal to the professor. But it’s in those small moments and in our minds that life happens. In fact, even Tom the adventurer honors the small and the domestic in his meticulous cataloging of the pottery he finds at the cliff city. His larger-than-life persona that fills the second part of the book with energy might be as much a product of youth and early death as it is an attitude that can be sustained. Which takes us back to those difficult life questions.

This was my first experience with Willa Cather, although I’ve wanted to read her for ages and ages. I’m so glad Thomas gave me a copy of this book and urged me to read it right away. I’m not sure Cather will make it onto my list of absolute favorites, but she’s definitely an author I want to read more.

A Work in Progress: “I turned the last page and thought what a lovely, sad, poignant story, but at the same time I was filled with an uncertainty about it all, too.”

This entry was posted in Classics, Fiction. Bookmark the permalink.

20 Responses to The Professor’s House