Wrong: Why Experts Keep Failing Us and How to Know When Not to Trust Them 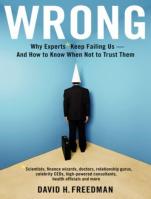 Regular Shelf Love visitors will probably be scratching their heads at the appearance of a book like this here on the blog. Neither Jenny nor I tend to read a lot of popular nonfiction of this type; our nonfiction tends instead to be memoirs, biographies, histories, and the like. Well, that used to not be the case for me. I went through a period a while back of reading lots of popular nonfiction—you know, all those books that get talked about on the radio and TV, written by gurus and researchers who quickly become media darlings. I read Blink, The Tipping Point, The World Is Flat, Freakonomics, and the like; and I got something out of all of them, even if I didn’t agree with every point each of these authors made.

However, I quickly got burned out on these books. It seemed like even if these authors made sound arguments, they still got boiled down into simple, easily digestible sound bites. And as I listened to the sound bites, and to the arguments that other “experts” built on those sound bites, I got cynical about the whole genre. So given my cynicism about so-called experts, when I spotted the review copies of David Freedman’s book at the American Library Association conference last month, the subtitle had instant appeal.

Freedman’s book looks at many different types of research and expertise, from studies in research journals, to popular financial advisors, to celebrity spokespeople, to your local doctor. He considers how and why their advice so often steers us in the wrong direction. He also considers why certain studies and certain gurus get so much attention when others, sometimes more reliable others, get ignored. It seems that people want dramatic results and easy-to-follow steps. Nuance and negative results are less interesting. And then there’s the whole problem of falsified data, which seems more common than most of us would like to think.

One of my favorite chapters, “The Idiocy of Crowds,” takes on the common notion that the best ideas arise from people working together. I do believe in teamwork, because I know I learn a great deal from working with others, but I also believe that the team approach is not always the best one. Freedman talks about how dominant personalities and groupthink can lead people who see a problem with the team’s solution to keep their mouths shut. Who wants to be a nay-sayer, right?

Besides not always leading to the right answer, teamwork is also sometimes more inefficient than individual work. It’s easy for someone to be nonproductive when working in a group—sometimes without even realizing it. But when asked to generate a list of ideas independently, that same person will know how much he or she is getting done. Interestingly, in a later chapter on technology, Freedman decries the lack of expert participation in collaborative online ventures, so there’s a tension in his argument. And that’s perhaps a good thing. Collaboration doesn’t have all the answers, but neither does working in isolation.

I also loved Freedman’s skewering of management gurus and their TLAs (“three-letter acronyms”). I know I could make a long list of TLAs I’ve encountered (and used!) in my job. I bet many of you could, too. This chapter, “Experts and Organizations,” points out how ridiculous it is to think that a management book available at any airport would contain the secrets that would enable every company out there to be a winner. Jerker Denrell of Stanford’s business school points out that this is not unlike a swim coach saying that every swimmer who follows her advice will win at swim meets.

My only real problem with the book is a problem that I’ve found in a lot of books of this type—a piling on of examples. After a while, they do tend to become a blur. Maybe if I weren’t already inclined to accept Freedman’s main idea I would need all those anecdotes and examples, but he didn’t need to work quite so hard to convince me. Still, the examples are easy enough to understand, and the book’s accessible, journalistic style kept it from ever feeling like work to read.

A lot of what Freedman had to say resonated with me, which, according to his logic, would mean that I should be suspicious of what he is saying because we are more likely to accept the results of research that supports something we already believe. Freedman does acknowledge the irony of presenting himself as an expert on expertise, and in the final appendix, he fesses up to the ways in which he might have massaged his findings to support his thesis. So maybe some of his examples wouldn’t stand up to scrutiny. His central ideas, though, are probably sound enough, based as they are on common sense. His main point seems to be not to accept everything you read at face value. It’s not advice a cynic like me needs all that much, I suppose, but I’m glad Freedman said it.

This entry was posted in Nonfiction and tagged Review Copy. Bookmark the permalink.

12 Responses to Wrong: Why Experts Keep Failing Us and How to Know When Not to Trust Them