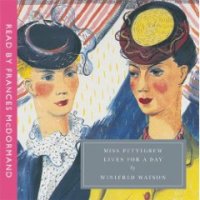 Can other people’s beliefs about us affect our beliefs about ourselves? Can a perfect stranger be a perfect friend? In the world of Miss Pettigrew, yes—for a day anyway.

The story begins when Miss Pettigrew’s employment agency sends her to a luxurious London flat to inquire about a position as a governess. Alone and friendless, Miss Pettigrew is desperate for a job, even if she hates being a governess. But when she arrives at the home of nightclub singer Delysia Lafosse, she doesn’t even get a chance to ask about the job before she’s drafted to help solve Miss Lafosse’s romantic problems—and those of her friends. Before long, she’s drawn into Miss Lafosse’s circle and having experiences she thought were only confined to movie screens.

Miss Pettigrew Lives for a Day by Winifred Watson was first published in 1938, and it’s now perhaps the most popular title released by Persephone Books, a publisher specializing in reprinting little-known 20th-century books, mostly by women. I’ve heard about Persephone for years, even before I started blogging, but I’ve never read any of their books, although I have a few on the TBR pile. My first Persephone turned out to be not one of those lovely grey books, but an audiobook, read by Frances McDormand. And if the other Persephone books are as enjoyable as this one, I have some wonderful books to look forward to.

I enjoyed this book quite a lot for its comedy and its light approach to questions of identity and choice. The book doesn’t read like it has something profound to say, but the power of friendship is a profound thing, and we see that through the characters’ actions.

There were a few times when I wanted to scream at Miss Pettigrew for her lack of confidence in herself and in her new friends’ willingness to accept her, but I think that’s part of the story. I can see that these people will embrace her, but Miss Pettigrew can’t; she’s had years of not being embraced, so why would think things would change now? Plus, the class divisions in 1930s London probably made Miss Pettigrew’s worries more well-grounded than they would be today.

My only other complaint is one that I think will only annoy listeners to the audio book but will be less of a problem for print readers. Watson goes way overboard with her adverbs in dialogue (I say critically). I’m not against this usage in every instance, but there were stretches of dialogue where Watson includes an adverb in every line (I say emphatically). Now, in print, my eye might have skimmed right over those words without taking them in (I say thoughtfully), but on audio, they really stuck out (I say disappointedly). I warmly recommend this book, with an encouragement that you seek it out in print, instead of audio.

This entry was posted in Audiobooks, Classics, Fiction. Bookmark the permalink.

23 Responses to Miss Pettigrew Lives for a Day (audio)