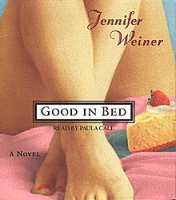 I read very few books that could be classified as chick lit, not because I think the genre is irretrievably bad, but because it’s too difficult to separate the wheat from the chaff.  I do like a nice wish-fulfillment fantasy from time to time, and good chick lit about smart women trying to cope with the travails of ordinary life can fill that need quite nicely. But too often, the characters are whiny and stereotypical and deserving of all the trouble they get into. (See “Five Things I Hate About Chick Lit” by KirstyJane at Vulpes Libres for a great explanation of what makes for good and not-so-good chick lit.)

Because bad chick lit is so annoying, I usually avoid the genre altogether, mostly reading it only for book club. And it was through my old book club that I discovered Jennifer Weiner. We read her book In Her Shoes a while back, and I enjoyed it quite a lot. The main character was likable, the story wasn’t entirely predictable, and I got a few laughs from it. I didn’t love it enough to go out and read all her other books (even the best chick lit doesn’t thrill me that much), but I made a mental note to check out more of her work if I get the craving for some light wish-fulfillment fiction. When I spotted Good in Bed, Weiner’s debut novel, in the audio section of the library a couple of weeks ago, I decided that it was just the kind of thing I was wanting to read.

The main character of Good in Bed is Candace Shapiro, a plus-sized Philadelphia journalist who is still getting over a break-up from her boyfriend Bruce when she discovers that Bruce has written a column about their relationship for a prominent magazine. The column, titled “Loving a Larger Woman,” is actually kind of insightful, but Cannie is humiliated to see herself called fat in print (even if Bruce just uses her first initial). As the novel goes on, Cannie tries to lose weight, rekindle her relationship with Bruce, sell her screenplay, and figure out how to cope with her verbally cruel and now absent father and her just-out-of-the-closet lesbian mother. And that’s just the beginning.

I’m sure some would describe Cannie as self-absorbed, whiny, and bitter, but I liked her. Some of her reactions were a little over the top, but, heck, when dealing with relationships, who isn’t a little over-the-top sometimes? Most of the time, I got why she felt the way she did, even if her feelings weren’t entirely fair. Even her self-absorption seems pretty natural and understandable from someone who’s dealing with all the stuff Cannie deals with during this book. (And her problems do get quite serious, serious enough that any wallowing that she does is justified.)

Good in Bed does feel a little overstuffed with plot. The different threads related to family, career, weight, romance, and so on, all shape Cannie into the person she becomes by the end of the novel, but there didn’t need to be so much. Every time the story swerved into a new area, it lost some momentum. There are also some shifts in tone that took me by surprise. One minute, it’s a frothy comic tale—the next, it’s a dark personal drama.

There’s a whole section in Hollywood that, although entertaining, could have been lifted right out without doing the book any harm at all. It might even have helped. Although I liked her love interest well enough, I could even have done without the romance. (Spoilers ahead.) The main thing that bothered me about the romance is that the way it’s handled sends the message that if you get your life together, you’ll be rewarded with a wonderful man. And life so doesn’t work that way. But some women’s wish-fulfillment fantasies must include a man, so the obligatory happy chick-lit ending will probably include a man. At least the man’s role here doesn’t seem to be to sweep in and fix all of Cannie’s mistakes. He helps out, but mostly by showing Cannie that she needs to ask for help sometimes, and that’s not a bad thing. The ending is a little too sunny, perhaps, given what’s gone before, but it’s a wish-fulfillment fantasy. What do you expect?

See other reviews at A Girl Walks into a Bookstore and The Egalitarian Bookworm (Chick?).

This entry was posted in Audiobooks, Contemporary, Fiction. Bookmark the permalink.

3 Responses to Good in Bed (audio)