In 2003, four lions escaped from the Baghdad Zoo during the bombing of the city. In this graphic novel, author Brian K. Vaughan and artist Niko Henrichon depict what might have happened to the lions during their short period of freedom.

As the book begins, the idealistic lioness Noor is plotting an escape, but the more experienced Safa, also a lioness, scoffs at Noor, saying that she doesn’t know how difficult “freedom” really is. The male, Zill, seems ready to accept whatever comes, and young Ali is filled with questions. And then the bombers come.

After their cage is damaged during the attack, the lions leave the zoo. They struggle to find food, navigate tricky relationships with other animals, and most of all, try to understand what’s happening around them. It’s not at all difficult to see their situation as a metaphor for the plight of civilians in a war zone. They discuss and debate just as humans do. They have moments that test their loyalty to each other and their understanding of morality. At times, the ethical quandaries, such as when the lions encounter a human body, seemed too much like plot devices because, really, for a lion, what’s the quandary? But it’s a book with talking lions. They’re already anthropomorphized, so what’s the harm in pushing it a little further? 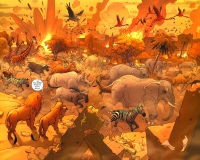 The art in the book is amazing. The detail,  the expressiveness in the animals’ faces and body language make for riveting storytelling. Several panels take up a whole page or an entire spread and contain little or no dialogue, which seems appropriate. Some things can’t be talked about. Some of the images are very, very gruesome. There’s blood; there are corpses; there are explosions. It’s every bit as violent as a war story needs to be if it’s to be at all realistic, but anyone who’s sensitive about violent imagery might want to stay away from this book.

I haven’t read many graphic novels (just Maus, Persepolis, V for Vendetta,  and now Pride of Baghdad). I’ve enjoyed all four of these books, so I want to read more. The problem that I have with comics and graphic novels is that so many of them are part of a long complex series, and I don’t want to get hooked on a series only to find that my library is missing several volumes. Frankly, I’d rather they not have any if they don’t get them all. So far, Fables is the only series I’ve found that they have in its entirety, so I do intend to read that.

So what graphic novels would you recommend to a relative newbie to the form? I’d be specifically interested in standalone graphic novels, comics that are available in relatively inexpensive omnibus editions, or series comics that can work on as individual stories (please, no cliffhangers).

Published in 2006, this book counts toward the Countdown Challenge.

This entry was posted in Contemporary, Graphic Novels / Comics. Bookmark the permalink.

6 Responses to Pride of Baghdad